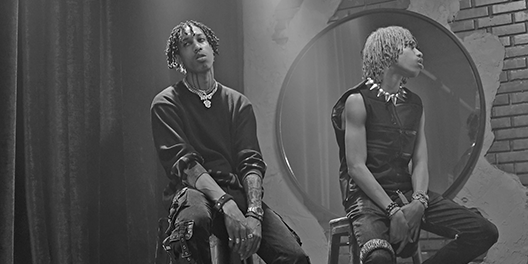 Ayo and Teo are from Ann Arbor – Ypsilanti, Michigan. They first came on the scene, with the hit single “Rolex”, which has over two billion streams. The two have never taken official dance lessons but sparked their careers by establishing a popular dance social media page. On this page they posted dance challenges that went viral. They now have over 5 million Instagram followers and 5 million subscribers on Youtube, becoming leaders of the youth.

The “reverse brothers” have performed with Usher at the BET awards in 2016, were in Usher featuring young thug’s, “no limit” music video, Gucci’s “Icey Lil bih” music video, performed at the Barclays Center with Usher, and most recently they were in the Chris Brown ft. Usher and Gucci’s “Party” music video. Ayo & Teo are currently in a JBL commercial, have a headphone deal with FanStereo, and confirmed deal with Fortnite.

They have many other music video appearances with such artists as Lil Yachty, Oh Boy Prince, Dlow, Anysa and Polo Frost. They currently have their own singles out called “In Reverse” and “Rolex,” which are climbing the charts daily!!

The two are not only skilled rappers and dancers, but are also extremely musically inclined. Ayo self taught himself how to play piano, trombone, and the drums. The duo has released hit singles including Lit Right Now , Like Us,  Better Off Alone, and Hold My Sauce. Their latest hits include Ay3, Fallen Angels, and Friends (ft. B Smyth) which can be streamed on all media platforms.